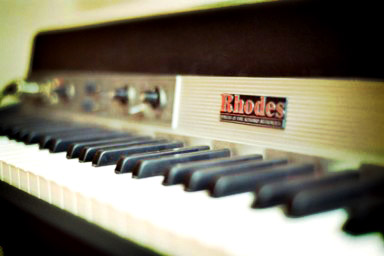 Fender Rhodes are highly considered among keyboardists. Since its commercial release in 1965, it has never left the modern music arsenal, from jazz to folk, from rock to electronica. Every synth that tries to imitate it can come close to its sound, but not totally mimic it.

It has this mix of mild medium sounds and bright glockenspiel-like textures that makes it useful for a lot of styles. Miles Davis or Herbie Hancock used it a lot in jazz. In folk-rock music, mixing it with acoustic guitars is always creating a nice effect. In alternative rock, Radiohead makes an extensive use of this instrument for example.

Technologically, we can understand why it sounds the way it does: a hammer hits a tine – very likely the kind of tine you find in a glockenspiel – and the sounds is captured by magnetic pickups, the very same technology you find on electric guitars.

I don’t own a Rhodes myself, because until a few months ago it wasn’t manufactured anymore. But the studio in which I’ve recorded owns one, so I was lucky to be able to put onto tape the “real thing”. So otherwise I’m using the virtual instrument devoted to it on my garageband and I have to say that it sounds really good and close to the real instrument. Most of the time, I would not be able to tell the difference, it’s when you hit the notes hard for example that you hear that it’s a fake one… So it’s kind of my Rhodes for the poor… By the way I’m still amazed of the sound quality of garageband instruments, as this software is already integrated when you buy your mac.

This site uses Akismet to reduce spam. Learn how your comment data is processed.